19ths got the job done in a nail biter v Kingsford. After the umpire took us through about half the laws of cricket before the game, including the most important: DON’T TOUCH THE STUMPS, we won the toss and batted, with a solid start from Jimmy and Lach, and number three Centejas. But we lost wickets in clumps, and were fortunate to have Arul holding it all together with a crisp 42, which unfortunately he was not able to come back and capitalise on due to being awesome. So with some now typical late order hitting we still got to 8/154 in the 36th. This was good, but on a Waterworth Park that is actually looking pretty good these days with a quick outfield, looked a little light on.

It definitely looked a little light on as the Kingsford openers got going early, launching them to 0/53 after 11, until Jumpin Jimothy Ryan picked up his 399th wicket with a little snick that was well taken by Christian, sending their opener packing on 39. Looking at the rest of the match, its hard not to describe that as a turning point, as over the next 15 overs, we pretty much just ran through them. Jimbo got the first three, including, obviously, wicket 400 for the Gladdies, the second player to do so after, well, someone. Then Arul chimed in with three more, including an absolutely ridiculous one handed caught and bowled, reminiscent of one M.Stradling.

The catching in general was pretty tops, including another great catch to debutant Josh. Centellas chimed in with a vital 2/27 off six in the middle overs, and all of a sudden the Nazgul needed 62 for victory, with just one wicket in hand. But they did have their Witch King at the crease (unfair… John was actually a decent bloke, albeit an England fan). He batted extremely well, keeping out good balls and finding the gaps off the rest. He whittled the runs required down to 26 to go, then 18, then back up to 22, then down to 12… it was hard to follow the scoring, but it was looking like he might get them over the line. But no sooner had he brought up a heroic 50 than Jamie swooped, getting an lbw that had us sneak away with a 7 run win. Wow. Good times.

The 20ths pulled off an unlikely victory in this one. Despite a pretty stacked batting line up, and another small ground in Burwood Park, the team was dismissed for just 127 in the 23rd over. Lakshman fell just one short of a retirement, and Flossy and Schoeff each got 21, but lots and lots of runs were left behind, and there was a grimness about the trudge out to bowl.

But early wickets to Kiran had VOne on the back foot, and incredibly tight spells from Schoeff and Flossy in the middle and two wickets to Soli had the game looking almost over at 7/64 at drinks. But VOne built a very solid stand, and got their score up to 108, before Rahul struck, first with the ball and then a great catch off Kiran to finish the game off. 19 run winners in an absolute boilover. Well done to Christian taking over the Rayns* of the team for the day. Better luck next time, Kunal.

*see what Mark did there?

Not so great. 195 is a fairly decent score, but not really enough on the tiny Johnstone Reserve. We certainly left a few runs out there too, having started well and looking good at 3/150 with 12 overs to go. But it all fell apart pretty quickly, and we were all out with 3 overs to go. Flossy top scored with 44, with solid contributions from Lach, Kunal, Lakshman and Jamie.

Our bowling started fairly well too with Flossy bowling express and Jamie getting an early wicket. But the lack of six frontline bowlers hurt us, and the Ponds took their time and then went for it when they could. In the end they cruised home with five wickets and 6 overs in hand.

Well, after plundering attacks for 200+ a couple of weeks in a row, it all had to change at some point. Once again the Gladdies lower order fired here, but having been 3/48 at drinks, it was always gonna be a tall order to win this one. Summer Hill bowled quite well, and we just couldn’t get the ball away regularly. Thanks to a fantastic final partnership of Jimbo and Jamie, we did manage to score nearly half our runs in the last 11 overs, and 43 in the last 5, but 149 was not really enough on a field that was largish, but relatively quick.

Summer Hill started utterly in control, scoring 28 off the first four overs, but we chipped away, and chipped away, focusing, without being explicit about it, on building pressure. Debutantes Kiran and Arul both bowled impressively, and Simon picked up a tidy 3 fa, but in the end, they just had too many overs, and hit the winning runs with a good 8 overs to spare.

Play washed out. Don’t believe me?

The 20ths matched the 19ths by recording a big win at Moore Park. Asked to bat first we weathered a really very strong opening spell, patiently getting to 1/33 off the first 12. But the bowling got much easier after that, with Jimmy cashing in for a second consecutive 40. His retirement and a couple of quick wickets set us back a little, but we consolidated and got to 3/115 off 26. At that point, we just exploded for the last 10, not least helped by Marty scoring 43 off 13 scoring shots. Including 5 singles. Ouch. By the time the 36th was bowled we had 209… you do the match on that last 10 overs.

Jamie and Marty kept it tight early, and when Jamie had a double break through in the 5th, it was grim times for the Apaches. Lach and Jimbo each chimed in with another, and it looked like it might be a short game. But the Apaches dug in, and hit out when they could, and managed two retirements. The bowling was just too good to consistently get away though, and Marty nabbed a couple at the end to leave them nearly 40 short and 7 down. Another good win.

The 19ths got us under way in stylish fashion with a very comfortable win. That particular Gypsies outfit had never played together before, and things were a little rusty early on, conceding 16 off the first over, albeit only one off the bat. Kunal and Jimmy gave us the best possible start though, each recording unbeaten 40s, as we surged to 0/124 at drinks. The middle order all contributed solid 20s, before debutant Mayur smashed another 40 to put us well over 200. The final damage was 266, our biggest score for a while, especially in winter comp.

The Gypsies showed fight early on not giving wickets away and hitting a few boundaries. But Jimbo picked up both openers, and they were only 90 at drinks, with a power of work to do. As such, it was a little cruel to unleash Flossy on them at that moment, and when his 6 over spell was done with figures of 3/9, the game was over. Mayur also impressed with the ball, and Funky showed what’s been under the hood all these years, picking up a pole, and being unlucky on several other occasions. While the game did drag on, we couldn’t begrudge the Gypsies playing for a bit of pride, and they finished a defiant but wildly uncompetitive 8/150 off their 36. Bewdie.

The minor semi final was delicately poised at the end of week one, with the Gladdies putting in a very solid bowling and fielding effort yesterday, but with plenty still to do next week.

Gus and Simon started very nicely, and Gus’ two breakthroughs had them 2/28 after 9. They then fought back, with a few solid shots, til Lach nabbed both batsmen in the same over with the catching playing its part. They went to the break at 5/98, and the Gladdies feeling pretty good.

Wickets kept falling periodically, but they had real talent batting at 9, and the Gladdies had to really lift as the humidity started to take its toll. But we stood up when needed, as Jimbo and Jamie closed out the innings with two a piece, the last wicket falling with 1 ball to spare in the 50th. 188 is not a massive score on MP6… but we still have to get them. Let’s hope the rain holds off and gives us a chance.

Not a bad performance week one, but victory is by no means certain. MP6 is not a big ground, but early and late rain made the outfield pretty slow. The top and middle order all got starts, but it was really only Kunal (30) and one D.Burchsixtyfive that really put sustained pressure on the Parramates attack. Still, 192 is eminently defendable, and we have a solid bowling attack too, so victory, and a remote chance of making the major semi final, is still on the cards.

The Gladdies couldn’t quite get it done week two, with Parramates scraping over the line 9 wickets down and with only a handful of overs to spare. Things could have been quite different, not least if poor Simon hadn’t been sconed early on by a ball flying off the rubber run up, or the boundaries were actually close to where they were when we batted, or the outfield as slow. Certainly the Gladdies put in a solid bowling performance… or at least one person did. Parramates were looking very, very comfortable at 0/81 off 17 overs, despite Gus bowling beautifully at one end. Jamie vocalised what we were all thinking – that after 360 odd games it was time for Jimbo to prove himself. Which he then very promptly did, nabbing his first Gladdies hat trick. He backed that up with a further 4 wickets in a very solid 12 over spell, leaving the game delicately poised with Parramates needing 37 off 12 with only 2 wickets in hand. But they ground it out, and took away the bikkies. Still,
a good effort, and very hearty congratulations to Jimothy for his 7 for.

The Gladdies cemented their spot in the third grade finals with a solid win over Scott Muller. We elected to bat on a sodden MP4, and runs were not easy to come by, with a very slow outfield and sultry conditions. The Gladdies did their best, and, perhaps unsurprisingly, wickets were fairly regular and mostly caught, given the inability to score along the ground. There were solid contributions up and down the order, particularly Jimmy D’s 27 and Rookie and Kunal’s pair of 23s. 9/140 felt like a good score, but not a certainty at the break.

Scott Muller found the going tough from the outset, with Flossy and Rookie making life difficult for the openers. Rookie got one, before Simon and Jamie put in some sustained pressure, with Simon grabbing another two. A double wicket maiden in Lach’s first over effectively killed the contest, and the Gladdies were in control from there, cruising to a 30 run win. Special mention to Johnny B, playing his first fixture in 6 years, who popped his shoulder half way through his second over, but said f.ck it and bowled picking up a wicket for his troubles. 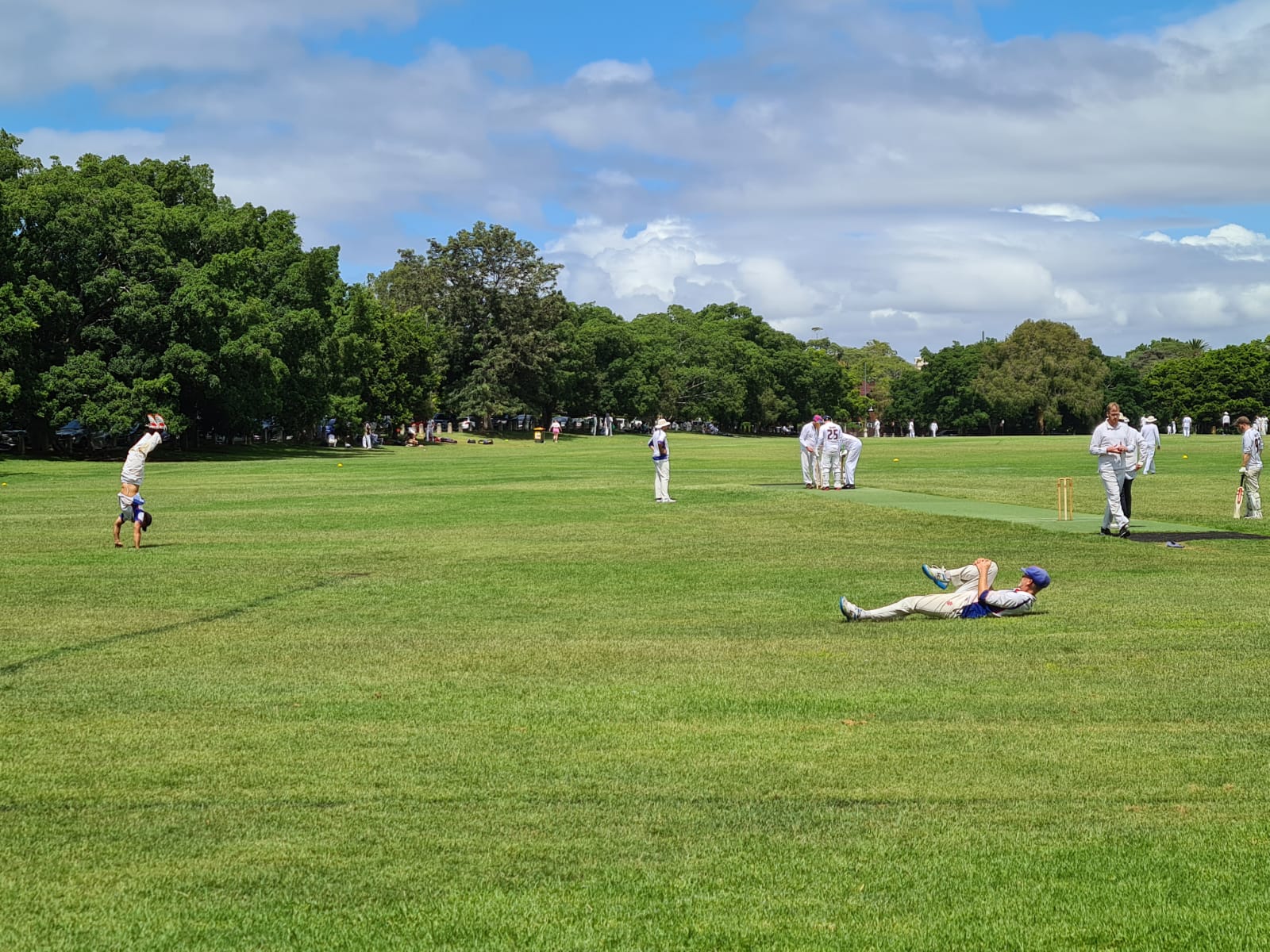 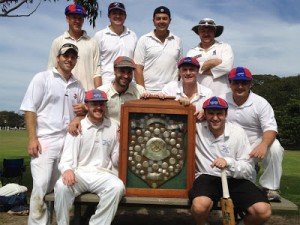